Would You Pay $50 for Coffee That Was Shot to the Mesosphere?

Pricey dishes usually announce themselves. The $35 burger at Db Bistro Moderne has foie gras oozing out of the center. The $1,000 Golden Opulence Sundae at Serendipity 3 is festooned with gold leaf.

But at Round K cafe on New York’s Lower East Side, the cup of Astronaut coffee is unprepossessing. It’s a pour-over that takes a few minutes to steep and arrives in front of you in a lovely, though not exceptional, china cup. The inky, brown brew arrives without decoration, and a cup costs $50.

Coffee with hefty price tags is becoming more common. Eleven Madison Park, voted the best restaurant in the world (with a $295 tasting menu) has introduced a $24 coffee service. It’s made from elite Colombian beans and brewed tableside.

Klatch Coffee Inc. in Southern California recently made noise with a cup of coffee that costs $55. Last year, the roaster in Rancho Cucamonga, Calif., was the only U.S. company to score a harvest of exceedingly rare Esmeralda Geisha Canas Verdes Natural beans, from Panama. An additional argument can be made for the chocolate-flavored Yemeni beans at up to $240 per pound.

Round K does not have triple-digit tasting menus or fought-over beans. The miniscule café has a roaster in the window, coffee bags for rugs, and My Korean Girlfriend breakfast sandwiches. What makes the Round K Astronaut coffee so pricey is what owner Ockhyeon Byeon does with the beans. He sends them into space.

“I wanted to check the effects of atmospheric pressure on coffee,” says Byeon. The thirtysomething, bleached-blond Korea native has a degree in electrical engineering from Konkuk University in Seoul and a tattoo of the molecular structure of caffeine on his right forearm. He started working at coffee shops in college and became fascinated by the chemical reactions involved. At Round K, he experiments with soaking beans in ocean water at Long Island’s Rockaways and explores the benefits of cold extraction by freezing ground coffee and water in pressurized containers.

To make his Astronaut coffee, Byeon put one pound of beans, sourced from a small farm in Colombia, into a weather balloon and launched it into space from New Jersey. He estimates that it went about 30 miles up, almost to the mesosphere. He recovered the heavily duct tape-wrapped package about five hours later, using GPS. When he opened the package, Byeon found the beans slightly frozen and coated with water, a result of air pressure.

Packages of Round K coffee.

I invited coffee expert Oliver Strand to enjoy a cup of Astronaut coffee. (The coffee goes on and off Round K’s menu, based on Byeon’s roasting schedule. He’s also selling 60-gram packages, good for two servings, for $50.) Strand has visited roasters and farms around the world and writes about coffee for such publications as the New York Times. This would be the priciest coffee he’s tasted that he didn’t brew himself. At home, Strand has prepared Geisha coffee, a comparably pricey strain of Ethiopian beans grown in South America described as having notes of bergamot and citrus.

There’s been a rush to copycat Geisha in countries such as Brazil. Even if the result isn’t amazing, the label means that farmers—and coffee bars—can double their prices. “Everyone wants Geisha now,” says Strand. When the coffee first became popular about a dozen years ago, the biggest buyers were in the United States and Europe. Now the market is biggest in Asia, specifically Korea, China, Taiwan, and Japan. Strand says this is partly a Starbucks Corp. effect.

“In America, Starbucks has established the cost of a cup of coffee at $3 to $5. Some people will pay more, but it’s hard to move far beyond that. In China, they treat a $100 cup of coffee as another luxury good, like a belt or a handbag. They’re not comparing it to another cup of coffee; they’re comparing it to a nice steak.” Likewise in Japan, a tiny bag of beans can be presented as a gift, not unlike a perfect $200 melon.

Strand and I sat at Round K’s six-seat counter, letting our cup of Astronaut coffee cool so the flavors could come through fully. It was light, dirty brown, with a soft, fruity scent. The flavor was tangy and suggested licorice, especially soft compared to Round K’s standard pour-over, which is made from the same (Earthbound) Colombian beans and costs $5.

Strand’s judgment: The coffee isn’t worth $50—at least to him. “It might be worth $50 to someone else. Value is in the eye of the beholder. You’re paying for the idea, and it is a pretty cup of coffee,” he tells me. Personally, I preferred the egg cappuccino ($6.50), an incredibly rich, velvety affair with a yolk whisked into the hot espresso, plus a thin layer of sweet whipped cream and a dusting of bitter cocoa. I ordered a second. 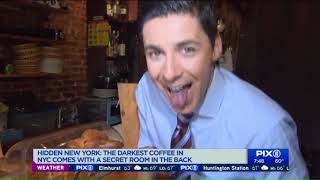 Taste The World’s Blackest Coffee On The Lower East Side

6 Places you HAVE to visit in NYC